Hello crafty friends, it's Karen here today and I've got a fun birthday card today for someone with an October or fall birthday. It's an interactive card as the ghosts are all on swing mechanisms and move when the card is shaken. 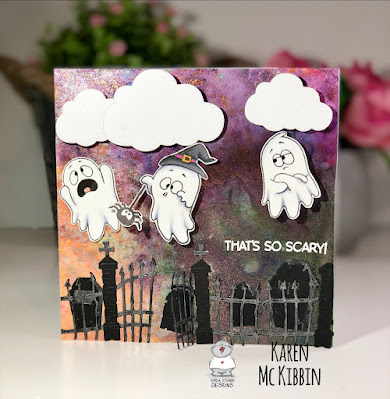 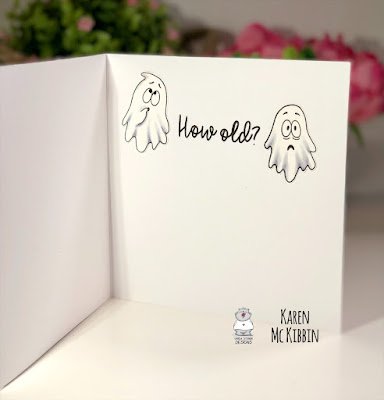 I've used the "Ghosts" stamp set from Gerda Steiner Designs for this one.  My card is 5 1/2 " x 5 1/2" square, so slightly bigger than normal.  I started by creating the background.  I used Cosmic Shimmer Pixie Sparkles Powder in Wild Plum, Pumpkin Patch and Cut Grass.  These are those fun shimmer powders that you sprinkle on, mist with water and wait to see what happens.  It's a lot like alcohol inks - no two pieces turn out the same.  Once I had the colour that I wanted, I set it aside to dry.

I used some Copic markers in BV23, CO and C1 to colour in the ghosts, and then fussy cut them out.  The cemetary is from a "Graveyard" die set from Creative Expressions and I cut it from black cardstock.  I also cut a few clouds from white cardstock as they were needed to hide the swing mechanisms.  Once the background was dry, I glued the cemetary in place, and white heat embossed the sentiment which is from the Ghost stamp set.

The swing mechanisms are easy to make and no special dies are required.  I used a piece of packaging acetate from a die set.  Using a regular paper punch, I punched a hole near the top left corner of the acetate.  I then cut a strip of the acetate just slightly wider than the hole, and just rounded the outside top edges around the hole.  The picture may help explain this better. 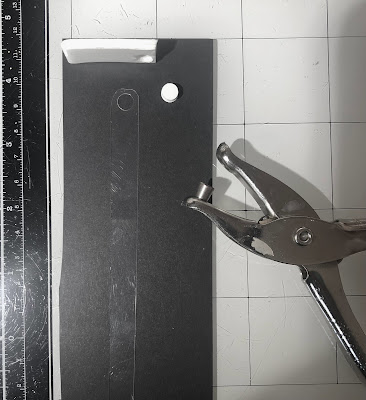 I then doubled up some foam tape, and used the same hole punch to punch out a piece of the tape. This foam tape fits inside the circle on the acetate, so if it feels too tight, you can use the paper punch to slightly enlarge the hole.  The acetate needs to be able to swing freely.  Next, I decided where I wanted my ghosts to go on the card front, and placed the acetate strips there.  I removed the backing paper from the circle pieces of foam tape, and placed them inside the acetate circles.  Then I used double sided tape to adhere the ghosts where I wanted them to go on the acetate strips, and trimmed the long side of the strips so they didn't stick out from behind the ghost.  If you want your ghosts to have a lot of movement, you can attach a penny to the back of the ghost which gives it more weight (I used regular cellophane tape to attach mine).  To prevent the strips from falling off the card, I attached the clouds over the foam circles and added a little more doubled up foam tape above the swing mechanisms to help support the clouds.  You want to be careful where you put the foam tape as you don't want to impede the acetate from swinging.  That being said, if the ghosts swing too much, you may want to put a little piece of doubled foam tape under the cloud to block some of the movement. Just play around with it until you have them moving the way you want them to.  It's not hard, I promise you, but it is a lot of fun.
Before attaching the card front, I stamped the inside sentiment and added the extra two ghosts.  Finally, I glued the card front to the base and then played with the swinging ghosts.  I hope you'll give this a try as it's a lot of fun!  Thank you so much for stopping by.