Hello everyone, it's Karen here today.  I was totally inspired by Jennifer McGuire’s recent video on making simple pendulum cards. It was sheer genius and the minute I saw it, I thought about using her technique with Gerda Steiner's pigeons. If you haven’t seen Jennifer’s video, here’s a link to it - Cards with Simple Movement. 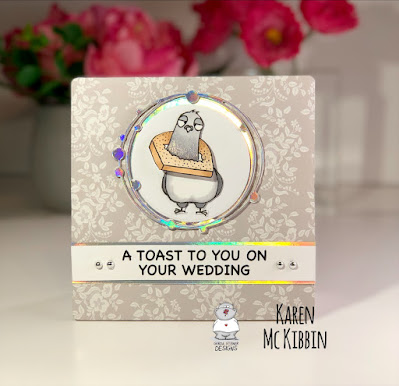 Now, I know this is not your typical wedding card, but it is a fun one!

To make this card, I used a 5 x 5" card base and also cut a card front from white cardstock that was the same size, as well as one from the background paper which is from the Belle Fleur collection by Craft Consortium.  I wanted the background to look a little like wedding card material! I adhered the white card front and the wedding paper together.  I also die cut a circle from white cardstock and one that was slightly larger from silver holographic cardstock.  The Bubble Circle is from Memory Box, and I cut three of these from white cardstock and one from the holographic cardstock.  These were glued together with the holographic one on top. I glued the silver and white circles to the card front in the upper third of the card, and then glued the Bubble Circle around it.

I stamped the pigeon which is from the A Toast to You stamp set by Gerda Steiner Designs, onto Neenah Solar Crest 80# cardstock twice.  On the second image, I only stamped the lower half of the pigeon, below the piece of toast, and just masked off the toast with a piece of Post It paper.  I used Copic markers to colour in the pigeon (N4, N2, N1, N0, E34, E53 and E30), and then fussy cut them out.  For the head image, I only coloured to the end of the toast and only cut this part out.  On the bottom portion of the pigeon, I slightly extended the lines of the body before colouring, and then cut this slight extension out with the rest of the lower half.

To create the pendulum mechanism, I cut a small strip of packaging acetate (about 2" x 1/2" wide), and rounded the top edge with my scissors.  I attached a penny to the bottom of the acetate with double sided tape. I positioned the pigeon pieces where I wanted them to go on the circle, and marked with a pencil just behind the center of the head.  Using a large paper punch, I punched a hole here, cutting through all the layers of the card front.  I also cut a circle of doubled up foam tape, using a regular paper punch which was slightly smaller than the hole I had made on the card front. I attached this piece of foam tape to the top of the acetate pendulum, and from the back of the card, pushed the foam tape through the hole I had made, to the front of the card.  I attached the pigeons' head over top of this foam circle, securing the pendulum to the card.  I then glued the lower half of the pigeon in position under the toast. The pendulum can swing quite wildly if you don't minimize its movement, so I figured out how far I wanted it to swing and put strips of doubled up foam tape on the back of the card to stop it swinging too far. Finally, I placed doubled up strips of foam tape all around the edges of the card, being careful to not interfere with the movement of the pendulum.  To attach the card front to the base, I used low tack tape on the front of the card to keep the pigeon in position, and then removed the backing paper from the foam tape and adhered it to the card base.

I created the sentiment on my computer and printed it out.  I've got a new laser printer, so although it doesn't show in the photo, I did foil the sentiment in my laminator with silver foil.  I matted that onto a strip of the holographic cardstock and attached that below the pigeon.  Finally, I added a few silver pearls because, well, it is a wedding card after all!

Thank you for stopping by and I hope you'll give this technique a try as it is a lot of fun!
Posted by Karen at 11:00 PM