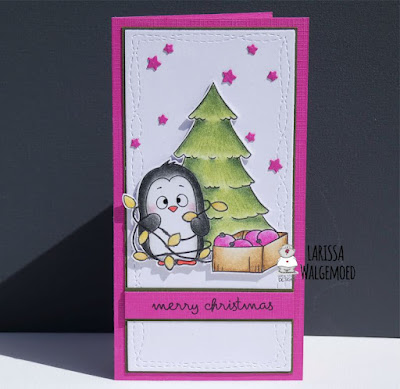 Hi everyone, I am Larissa from Car-d-elicious and today it is my turn again to post a card on the blog from Gerda Steiner designs. Because it is july I decided to make a christmas card for Christmas in july. This way I should have a nice stash of christmas cards ready in december. ;) 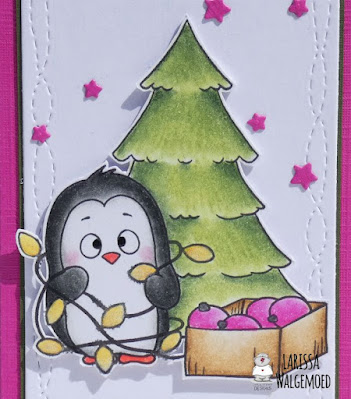 I have made a mini slimline card with the digital stamp Decorating penguin from Gerda Steiner designs. I have coloured the image with my Polychromos pencils and the black glaze pen. I have coloured the lights with the Clear Spectrum noir sparkle glitter pen and then I coloured them with a Clear glaze pen. I have fussy cut the image. With the Mini slimline Wonky stitched dies from Kat Scrappiness I have die-cut a rectangle from white cardstock. I have glued the rectangle on a rectangle that I have cut from green cardstock. Then I glued the rectangles on a pink mini slimline card. I have stamped a sentiment from the stamp set Simple script from Clearly besotted stamps. I have glued the strip with the sentiment on green cardstock and then I glued them together on the card. I have added the image with foamtape on the card. I cut a couple of stars from pink cardstock with the Star confetti die from Alexandra Renke and then I glued those around the image on the card. 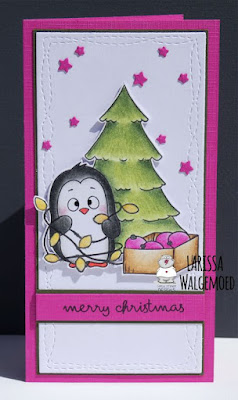