Hello again and welcome!  It’s Karen here today and I’ve got a card that I actually made a while ago, but have since made a video for it that I want to share with you.  I think of this card as being appropriate for a masculine card, so I’m going with that!  It features the adorable frogs from the “Frogs” stamp set from Gerda Steiner Designs  and I added a few images from the “Lucky Duck” stamp set as well. 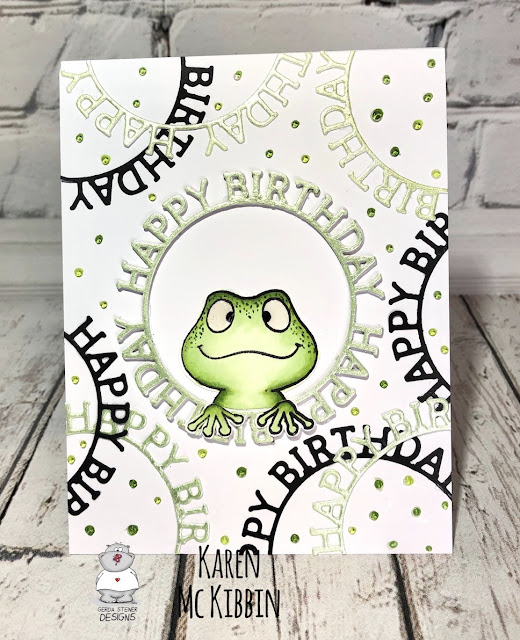 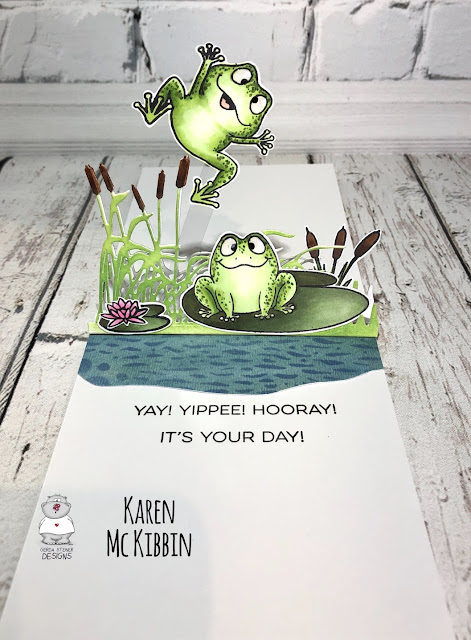 If  you would like to see a video of how I made this card, I have it posted on my YouTube channel  and you can CLICK HERE to view it.


After copic colouring my images and cutting them out, I added glossy accents to all the frogs eyes and set them aside to dry. To create a shiny green cardstock for the happy birthday circles on the front, I combined some Nuvo glacier paste in Pineapple Delight and Sea Sprite to make a bright green, and spread that out on cardstock in a circle pattern. When it was dry, I used the Simon Says Stamp “Birthday Circle” die to cut it out. I also used this die to cut some circles from black cardstock. I stacked about 3 circles from white cardstock and added a final layer in the green for my center circle, then glued this in the center of my front panel. I glued down portions of circles around this in a mix of the black and green die cuts. I cut the hands from the front frog, trimmed his chest to fit in the circle, and then glued his hands down onto the center ring. Finally, I added dots with some of the copic markers I had used for the images, and added glossy accents to the dots.

For the inside of the card, I watercoloured a small piece of watercolour paper in a mix of blues and greens to make my pond. I used Distress Oxide Faded Jeans to stencil over the water with a stencil from The Crafters Workshop called Mini Sea Bubbles. I freestyle cut this piece to resemble a pond.

I die cut two grassy borders for the triangle pop up. You could use any straight grassy border in your supplies or even make your own border by cutting grass into 2 pieces of cardstock temporarily adhered together. I used a die from Paper Roses called Cattails and Grass border die. I then used brown copic markers to colour the cattails and Distress Oxide in Mowed Lawn for the grasses. I coloured both grassy borders, but for the one in back, remember that you actually colour the wrong side of the die cut. I creased both of these grassy die cuts at 1/4” from the straight edge, creased the folds and added double sided adhesive to the folds.

Next, I adhered the right leg of the leaping frog to a piece of scrap acetate with double sided tape and adhered him to the front grassy border with more double sided tape. Then I attached all my other images with glue, being careful not to get excess glue on the grassy areas.

I glued down my “pond” by positioning it 1/4” from the inside crease of my card. Now I could see where to stamp my inside sentiment and this is best done before adding the triangle pop up. I used a sentiment from MFT’S Yay for You set.

This is such a fun card to receive because the inside is so unexpected, and those frogs definitely make it a masculine card - always a bonus!!  I really hope you’ll give this one a try. Hope you have a great day!